This month’s starting out as one filled with vibes and groove. Party jams left and right. And you won’t believe who came out of retirement! Or maybe you never really expected that he’ll be gone for that long sef. It’s Logic. CDQ is also in the building, Bella Shmurda, Joeboy’s also on deck and Davido is still repping on a global scale.

We’re still anticipating the drop of High Tension 2.0 which is set to drop sometime later this month. But the recent signoutter from the department of History and International Studies, LASU, whets our appetites with another groovy track.

Right from the intro you’re set to be hooked by the song.

“This is the time of our life

I hope you feeling alive”

The third single off their upcoming album “Mercury – Act 1”

“These days I am becoming everything that I hate

Wishing you were around but now it is too late

My mind is a place that I can’t escape…”

An amazing song littered with so many emotions and beautiful lyrics as the band frontman sings to deal with the pain of losing his sister-in-law.

Ko-jo Cue – For You ft. Joeboy

Kojo Cue got Joeboy pon deck on the second track from his album— 21 Memory Lane.

“Everyday na you I won call,

Morning and night I dey your domot

I no won go anywhere no more

I fit to fight for your love, I no go run away

For You is a love song— a perfect blend of well-delivered chorus and scintillating rap. Trust Joeboy to do what he does best— be a loverboy.

Rexxie showed us how much of a great producer he is, flexing his range on beats making on this project while employing vocals from the likes of Teni, Sarkodie, Naira Marley (wasn’t surprised), Asake, Kida kudz, Mohbad, Bella Shurmda, Buju, and so much more.

PS: Sarkodie and Naira Marley are on the same track.

I thought we all agreed that Logic retired to face father duties?

“Came back to the scene, came back with a team

Came back from the trap to supply all the fiends”

Man’s back and we’re all up for it. It’s not uncommon to find artists saying they’re retiring, only to show up with strings of dope content.

Logic is serving us with Vaccine and hinting on the release of Bobby Tarantino 3.

If you check the song description on iTunes, it was described as a modern dancehall sound and it definitely didn’t disappoint.

“Anywhere I go, promise I will always find my way home

Even by a bus, by a train by a boat

Me I tell those people, girlie you are my Chargie”

Reekado Banks’ class is shown through this song with Teejay and Johnny Blaze putting in their bit of work to make this a lovable song.

This groove in this song is lit. Perfect party track. Just right for the summer.

And damn, Davido’s entry! Can’t get enough of it

“Take my heart and run

Nigerian producers have been sampling the amapiano beat getting creative with it but this body of work Masterkraft is way more than being creative.

With vocals from (to be honest) unexpected artists, this album will rule our parties and clubs for sometime, so y’all better get prepared.

She give, she give me cudi, yeah (That wet-wet)

I be, ooh, into underwear (She took it off)”

This track gives off a vibe of a different Desiigner from the one we fell in love with in Panda.

No, don’t get me wrong; it is a great evolution

Easy song to vibe to with beautiful flows.

“This booty is a killer

It’s been a while since we last saw Mr Yeye in the building.

Now he resurfaces with a danceable vibe as he usually does.

Here on Tekiller, he attempts a subtle pun on the tequila drink to define a lady’s body as intoxicating and killing at the same time. 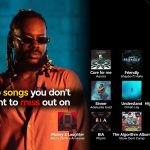